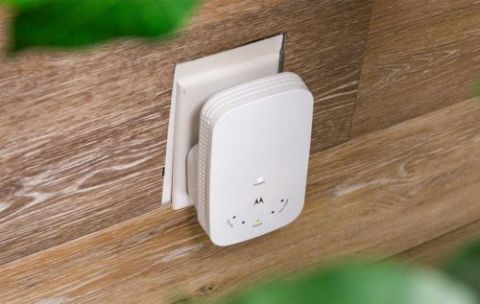 The Motorola MX1200 is a decent Wi-Fi extender with a few quirks.

The Motorola MX1200 is a dual-band Wi-Fi extender with unique built-in features. Its front houses six indicator lights, one for power and five labeled signal strength lights ranging from too close to too far. We appreciated how easy it was to use the visual signal meter, as the lights are also color-coded red, orange and green to represent the connection quality. In addition to the signal quality indicators, the MX1200 has a physical power switch, band selection switch, Gigabit Ethernet Port, WPS button and reset button. It was the only extender we tested that lets you choose the frequency band, which is helpful as it leaves no doubt which band you’re working with at any given moment. The 2.4 GHz band is slower, capable of speeds up to 300 Mbps, and it has a wider range. The 5 GHz band has faster speeds but doesn’t reach quite as far.

In tests, the Motorola extender rebroadcast up to 48% of the available Wi-Fi signal. We evaluated the extender’s performance by setting it up in our testing facility’s network and using Ixia’s IX Chariot to monitor network speeds on both the original signal from the router and the extended network. We ran five trials of five different test configurations spanning long distances, multiple floors and runs with several obstructions, including walls. We used the same methodology for every extender we reviewed, but some of the tests for the MX1200 were conducted with the red Too Close light on, which the manual says is okay. We calculated the average percentage of the available Wi-Fi signal the extender captured and rebroadcast as the extended network. Most range extenders experienced some speed degradation in the process, though products like the TP-Link RE450 managed to consistently maintain a high percentage of the network.

We had one distinctly negative experience with the MX1200. Our most difficult test configuration had our router in an enclosed, soundproof room with the extender placed 30 feet away and one floor up, and our test laptop a further 35 feet and several rooms away on the same floor as the extender. Though it was the most difficult test, only the MX1200 failed to perform consistently enough to collect results.

Overall, the Motorola MX1200 is a decent Wi-Fi extender, especially if you want the built-in signal indicator and hardware controls. Though it did fail one of our tests, it is still a worthwhile option for setups without quite so many physical obstructions.