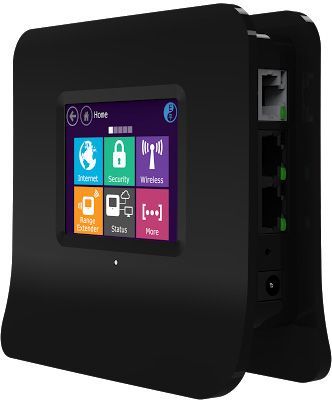 Securifi specializes in creating multifaceted routers designed to be easy to use and easy to set up. The company wants its products to be the hub of your smart home, and this is evident in the touchscreen of the Securifi Almond. The Almond is simultaneously a Wi-Fi range extender, network access point, wireless bridge and a regular router. It doesn’t provide a huge extended range, which is why it’s ideal for a medium-sized home with dead zones. When you combine the usability and versatility, it’s an excellent Wi-Fi booster for your home.

What makes this Wi-Fi booster relatively unique is the 2.8-inch touchscreen. This may seem like an odd addition to a Wi-Fi extender, but it enables you to make changes to the Almond's settings on the device itself. You won't need to use your computer to enter an IP address or anything. This is a major advancement for many people who aren’t tech savvy. Let’s face it – wireless technology is complicated. It can be difficult to set up a wireless router, to understand things like IP addresses and wireless channels. By adding a simple touchscreen with an intuitive interface, you don’t have to lean on your IT relative to set it up for you. Getting your home network up and running shouldn't be limited to those who have knowledge of networking technologies.

There are a few disappointing things about the Almond. First, the range isn't very impressive. During tests in the Purch Labs, the Almond had an effective range of about 100 feet. The signal reached farther, but the data transfer dropped off a cliff, making it basically ineffective. That said, a 100-foot range is ideal for a medium-sized home. Combined with your main router, you shouldn’t have much trouble blanketing dead zones with Wi-Fi. However, if you need a more powerful unit, check out the Netgear Nighthawk EX7000.

The second disappointing feature is the fact that it only works on the 2.4GHz band, which can drastically lower the data throughput when it's working as a Wi-Fi extender. Essentially, it can only send or receive at any given time – not both. This effectively cuts wireless speed in half on the boosted network. This was evident in our tests. As a main router, the Almond had an average throughput of 273.39 Mbps at 100 feet. As an extender, the throughput dropped to 104.94 Mbps.

The Almond features two Ethernet ports for wired devices. As the name implies, it also provides a very secure network, which isn’t always a guarantee with a boosted network. It features WEP, WPA and WPA2 security protocols.

While the Securifi Almond isn't the best Wi-Fi extender on the market, it's the best Wi-Fi extender for a medium home for the price. This is because the range is enough to cover a medium home and the touchscreen makes the booster extremely easy to set up and use. If you have smart devices, this is a great option to be the hub of wireless activity.