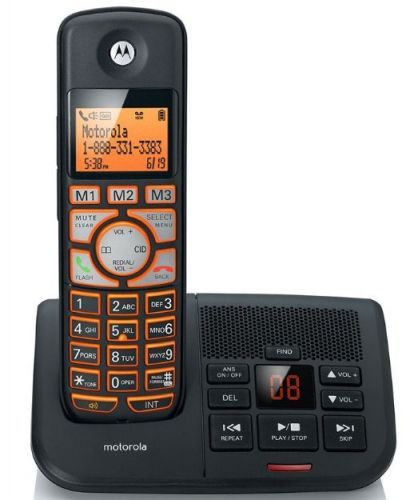 The Motorola K704B has unbeatable battery life and a slick, modern design, though it is missing a few basic features.

Motorola’s K704B cordless phone is similar to past iterations, including the Motorola Slvr or even the Razr cellphone. The K704B is the company’s sleek and modern take on cordless home phones. The device comes with three handsets, but you can expand to up to five, if needed.

Though the K704B boasts the longest battery life of any unit we evaluated, the landline phone also brings with it the longest charging time. Each handset requires 12 hours in order to reach a full charge, which is well over the industry average of seven hours. If this isn’t a concern for you, or you don’t mind switching out for another handset while one charges, then that shouldn’t be a deal breaker.

The best part of this phone is its overall design. The handsets are incredibly thin, comfortable to hold and easy to use. The display is bright and easy to read. Large households or a small business may benefit from the system’s ability to expand out to five handsets. The base also has an extra-loud speakerphone that works well for conference calls.

Where the K704B falls flat is its list of features. Compared to the best landline phones we reviewed, it is missing a chunk of functionality. The phone has conferencing and an intercom, but it doesn’t have Bluetooth. As such, there is no way to pair your cell phone or a wireless headset to the base. You can, however, adjust the volume to six different levels.

The phone can store just 15 minutes of recorded messages. That’s slightly less than the best cordless phones we reviewed, which boast an 18-minute storage capacity. However, this still doesn’t leave you with tons of space for loquacious callers to leave a message.

The system stores a total of 30 phonebook entries and the same number of caller IDs in its log. In addition, it has a three-number redial function. You can also program your favorite phone numbers into its speed dial function.

The phone ships with an industry-standard one-year warranty. Motorola’s customer support team is reachable via live chat, phone or email, should you wish to contact them directly with a question or concern. You can also check out the FAQs section and knowledgebase on the company’s website.

The Motorola K704B not only looks great, but also has the battery life and feature set to back it up. Though it has lackluster phonebook and caller log capacities, and lacks a few otherwise common functions, it’s one of the best landline phone choices for families, small businesses or anyone who forgets to regularly charge their handsets.