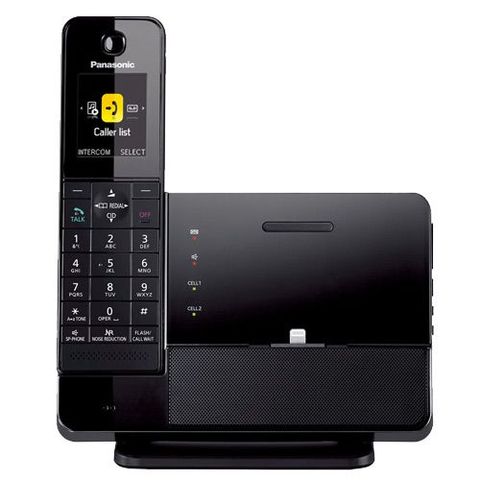 This Panasonic model is more difficult to use than other models, but the dedicated Lightning port makes it a good choice for pairing with your iPhone.

The KX-PRL262B by Panasonic is specifically designed to pair with your iPhone. Its base has a built-in Lightning connector that allows you to dock your iPhone, and after pairing your smartphone wirelessly via Bluetooth, you can take your cellphone's calls using the landline handset. This means you can use your smartphone as your home phone, and you won't need a dedicated landline plan to use this cordless phone model.

This cordless phone set includes two handsets, but can be expanded to use up to six. Each headset has a battery life of around 10 hours, and each will last six days on standby mode if you don't use the phone too frequently. They take seven hours to fully charge. Your iPhone 5, 5S, 5C, 6 or 6 Plus will sit snuggly on the base next to the cordless phone, and it too will get a charge. The dock doesn't work with Android smartphones because they use a microUSB port. Other cordless home phones have a built-in USB port for device charging. You can still pair your Android with the cordless phone via Bluetooth and use it; you just won't be able to dock it or charge it.

The base's speakerphone has loud, good-quality audio. The answering machine can store 18 minutes of recorded messages. After pairing your smartphone via Bluetooth, you can even play music through the speaker. However, the speaker only has two small drivers and it isn't extremely clear. It definitely is an upgrade from the built-in speaker of your smartphone, but don't expect the sound to fill your home. Be aware that there is no AUX jack to plug in a 3.5mm cord for wired audio.

As for the handsets, they have all the standard features of regular cordless phones. There are six volume levels and a silent mode, as well as a small LCD screen to display menus and caller ID. The text is smaller than that on other phones, but the display is bright and clear, and it isn't difficult to read. You can have conference calls with this cordless phone, set an alarm or use it as an intercom. Some other features that work when you pair your smartphone include text message alerts and the ability to use a wireless Bluetooth headset.

The handsets are very light and are made of a black plastic. The screens have a glossy finish so they tend to show fingerprints. The buttons on the handsets are flat, square and relatively small, so you can't just rely on your sense of touch to dial. If your vision is impaired, it will be easy to make mistakes when dialing. Both the display and buttons are illuminated, which helps for dialing in the dark.

The built-in phonebook can store 3,000 names and numbers. The phone will also remember the last 50 callers and the last five numbers you dialed.

The phones have a one-year warranty included with them. You also have several support options available if you need help or something goes wrong. You can reach Panasonic by email, phone or live chat. Not only that, you will find a downloadable instruction manual and a FAQs section on the company's website.

Overall, the KX-PRL262B offers several features specific to iPhone users, most notably a Lightning port for charging your Apple device. It also has many cool features like wirelessly streaming audio via Bluetooth. However has small buttons and lacks an AUX port and a USB port. This model falls short of the best landline phones, but it will meet your basic needs, and then some.