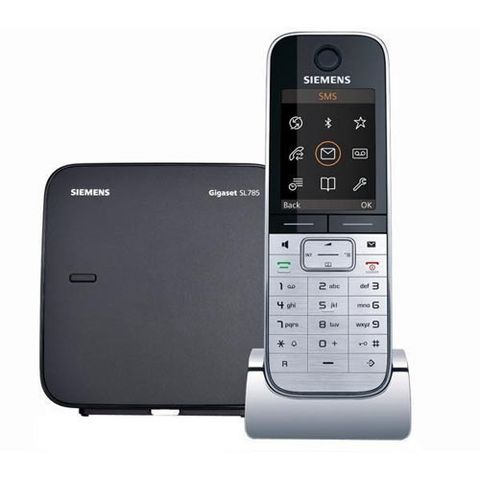 The Siemens Gigaset SL785 cordless phone gives you plenty of battery life, a short battery charging time, Bluetooth capability and its modernistic design would look good in any room.

The sleek and modernistic Siemens Gigaset SL785 boasts plenty of eye appeal and a number of useful characteristics. This easy-to-use cordless phone, with its remarkable 45 minutes of recorded message time and 15 hours of battery life, wins our Top Ten Reviews Silver Award.

Among other things, the well-designed Gigaset SL785 landline cordless phone offers a lengthy battery life, a short battery charging time and a phonebook that can handle 500 items. You also get Bluetooth capability with the base, so you can use a Bluetooth headset if you choose.

Unfortunately, this cordless phone lacks some key characteristics that kept it from our top ranking. For example, it does not have a base speakerphone. In addition, it lacks the helpful intercom feature that so many households find essential when it is time to summon everybody to be in one place.

Siemens began in the 19th century in Germany and is renowned for its innovations in communication. The firm built Europe's first long-distance telegraph line, made long-distance telegraph networks in Russia, used a watermill in England to power the first electric streetlights in a British town and has since manufactured electric trains, light bulbs, radios, television sets and microscopes.

This sleek, compact cordless phone will provide hours of talk time with a respectable set of features. Some features specific to the base station are lacking and the device is not as easy to use as some of its competitors, but the Siemens Gigaset SL785 remains a very high-quality option.