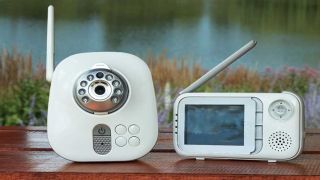 While some parents decide to tell their nannies about the use of a nanny cam, others choose to use the camera in a covert manner to get the best data concerning a nanny's true colors. If you've made the decision to spy secretly, you'll need to hide the camera so it's less likely to be detected by the nanny or anyone else who takes care of your child. By finding the best hiding places for your nanny cam, you'll get the best footage with the least chance of being discovered.

Inside stuffed animals. Some nanny cams already come with disguises to hide them from view. Some of these cameras are disguised as stuffed animals to blend in with the rest of a child's toys. Even if your security camera didn't come with the accessory of a stuffed bear, you can make one easily by purchasing a bear and then cutting a hole in its belly. Remove the extra stuffing and then place the camera with the lens facing out. You can then sew around the lens so that it's well disguised and then cut an access panel in the back to upload footage. Place the stuffed toy where it won't be disturbed, such as on a shelf, to indicate that it's not a toy for the child to play with.

Kitchen cabinets. If your kitchen features glass cabinets, you can easily hide a nanny cam behind fine china and other dishes that aren't used often. Just position the camera behind plates and cups, ensuring that the lens can be adjusted to offer a good shot of the kitchen in general. Since the kitchen is usually a highly trafficked area, you'll probably see some of the best footage from a camera hidden in the cabinets.

In plain sight. If you don't want to make a big deal of telling the nanny about the addition of the nanny cam, you can still make your caregiver aware of its presence by leaving it out in plain sight. The nanny will likely put two and two together to discern the purpose of the camera, or she might believe it's a type of security camera. Either way, leaving the nanny cam tethered to the ceiling or on a visible shelf sends a clear message that you expect a certain degree of behavior and care from your nanny without having to explain the camera's presence.

Remember that moving the nanny cam around after it's been placed could arouse suspicion, so choose a place and stick with it for the most covert observations on the level of care that your child receives when you're out of the house.

At TopTenREVIEWS We Do the Research So You Don't Have To.