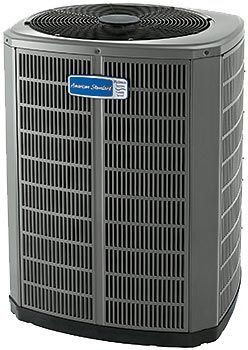 The central air conditioners in American Standard Heating & Air Conditioning’s inventory have high SEERs, or Seasonal Energy Efficiency Ratios. Many things can affect energy efficiency, but if all the components are properly installed, the company’s top model, the AccuComfort Variable Speed Platinum 20, can reach up to 22 SEER. That’s good, though not the highest we saw during our research.

That model, as well as others the company makes, is efficient because it has a compressor that adjusts in small increments instead of just turning on and off like old-fashioned ones. This also makes it more efficient than modern central air conditioners with compressors that only have low, high and off settings.

Avoiding the peaks and valleys of energy consumption with a variable-speed compressor also leads to vast improvements in humidity control. An American Standard variable air conditioner unit is on, at least at some level, more often than its two-stage competitors, so it removes moisture from the air more consistently.

American Standard air conditioner units are remarkably quiet. In fact, the company has the quietest units of the brands we reviewed – its models make an average of just 69.9 decibels of sound. The units’ sound insulation also helps block the small amount of noise they do make.

Its home AC units are sturdy, and since they are gray, they blend nicely into many landscapes. The air conditioners’ panels are made of louvered steel and designed to protect the coil while still promoting airflow. They have rust-resistant screws that are zinc-coated and designed to prevent corrosion, and an appliance-grade finish helps keep the elements away from the system’s important components. Also, the Durabase pan the company’s units sit on resists corrosion and cracks.

The American Standard website is informative, and its systems come with decent warranties – 12 years on the compressors in the 4A7A7 and 4A7V AC units and 10 years on those in other models. All American Standard air conditioners have 10-year warranties on other parts, including the outdoor coil. These warranties are better than those on most of the units we compared, which usually last for a maximum of 10 years, though some units from Amana, Coleman and Goodman have lifetime compressor warranties. However, like most AC manufacturers’ warranties, American Standard’s warranties are conditional on you registering your newly installed unit with 60 days – otherwise, it will only be under warranty for five years.

Best portable air conditioners: AC units to keep cool this summer wherever you are

Best window air conditioners: have a chilled out summer