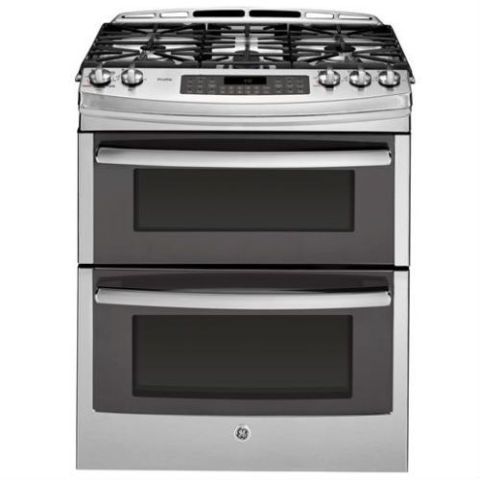 The GE Profile PGS950SEFSS is a gas double oven range that features a powerful cooktop, convection technology, 6.7 cubic feet of cooking space and five burners. It also boasts several additional features, such as delayed bake and a warm setting.

The gas-range cooktop has five burners. There are four circular burners, one in each corner of the cooktop, with an oval burner in the middle for long dishes. The cooktop reaches a maximum of 20,000 Btu, which is excellent for searing and boiling. One burner features up to only 5,000 Btu so you can use it for simmering.

There are a handful of controls and settings on this double oven range. You get basic features such as a timer and self-cleaning capabilities. With the heat self-cleaning feature, the oven reaches high temperatures for a designated amount of time to remove cooked-on food and debris. There is also delayed bake, which lets you set the oven to turn on later when you're not there, and a setting that allows you to keep food warm for a period of time without overcooking it.

All of the features and controls are located on the front of the oven. You don't have to reach over hot or steaming pots and pans to adjust the temperature and setting of the oven or cooktop. However, this can also be a concern if you have small children in your home, as the controls would be easy for them to reach as well. There are knobs to control the cooktop, while a touch control pad is there for the different temperatures and settings of each oven.

The best double oven ranges of 2019: double up in the kitchen

With five burners that have a wide range of power, 6.7 cubic feet of space between the two ovens, and numerous settings and cooking features, the GE Profile PGS950SEFSS gives you a lot of cooking versatility. You can use this double oven range to bake and roast in traditional or convection mode.

Top Ten Reviews has reviewed the Best Gas Ranges 2019 so that we're able to offer you the authoritative buying advice you expect.