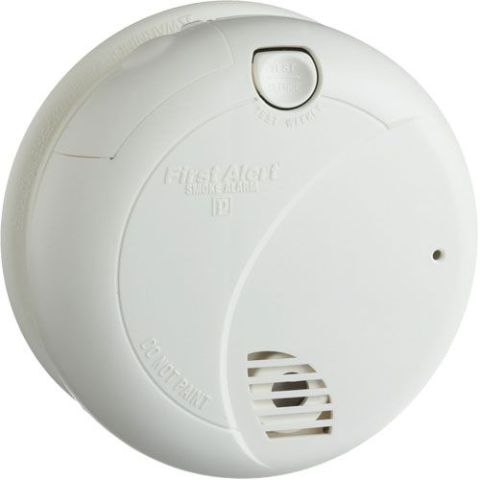 The First Alert SA710CN is an eco-friendly smoke detector because it's recyclable as an electronic device. It comes with a 10-year limited warranty and an optional theft-prevention lock. When the lock is activated, the battery or the alarm can't be removed without using the proper tools. As with all smoke alarms, the First Alert SA710CN should be replaced every 10 years to ensure it remains in good working order.

This smoke alarm is battery powered and has a blinking light to confirm the alarm is on and receiving power. It runs on one 9-volt battery that's included in the package. A low-battery alert lets you know when the battery needs to be replaced.

Photoelectric sensing technology can also reduce alarms caused by cooking fires and shower steam. In case an accidental alarm does occur, a test/silence button silences the alarm for up to 15 minutes. The same button is used to test the alarm. You should test the alarm weekly to confirm it is functioning properly.

With detection for smoldering fires and technology that reduces false alarms, the First Alert SA710CN is a great choice for your home. One-button testing and silencing and a 10-year warranty add to the value of this inexpensive alarm. As with all battery-powered smoke detectors, you'll need to be vigilant about changing the battery to ensure the smoke detector works when you need it to.