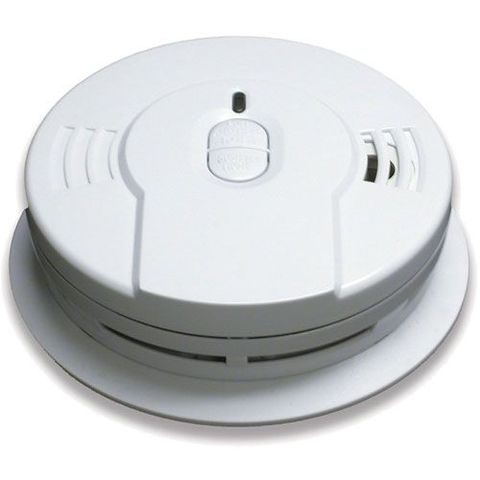 The Kidde i9010 is a white smoke alarm powered by a lithium battery. It measures 5.6 inches in diameter and 1.55 inches deep. Unlike other battery-powered smoke alarms, it uses a sealed-in lithium battery. The lithium-ion battery should last the lifetime of the alarm, so you won't need to replace the battery. This makes it a good smoke detector to place in hallways and areas with high ceilings, where it could be difficult to change the batteries.

The alarm is easy to install and automatically activates when it's attached to the mounting bracket. At the end of the alarm's life, approximately 10 years, the smoke detector chirps to let you know it's time to replace it. Using a tool such as a screwdriver, you can deactivate the alarm, which stops the low-battery chirp and makes the alarm safe for disposal.

As with the best smoke alarms, the Kidde i9010 includes an LED indicator, so you can see at a glance if the smoke alarm is working. The light flashes in a different pattern, depending on if it's in standby, alarm mode, hush mode or memory set. For example, when the alarm is in standby mode, the LED flashes every 40 to 45 seconds to let you know it's receiving power, and when it's in alarm mode, the LED flashes every 1.5 seconds.

The Kidde i9010 has a simple design, with just an LED indicator and two buttons on the front cover. The test/reset button lets you easily test the alarm and also reset it after an alarm condition. You can silence the alarm for up to eight minutes if it goes off due to smoke from cooking.

One advantage of this smoke detector is the lithium-ion battery that lasts for the lifetime of the alarm. This saves you the cost of replacing batteries on a yearly basis, as you'd have to do with smoke alarms powered by alkaline batteries. However, it lacks a photoelectric sensor for detecting smoldering fires.