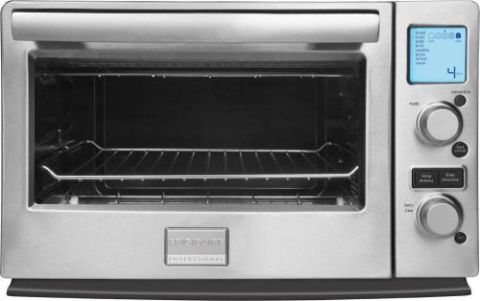 With a wide selection of cooking functions and a large capacity, the Frigidaire rivals the best toaster ovens.

The Frigidaire Professional 6-Slice Convection Toaster Oven FPCO06D7MS allows you to make cookies, pizza, roast, bagels and toast with ease. With its 10 preset cooking functions, you can cook a wide assortment of foods with this oven.

Using the bake function, you can adjust the temperature between 150 and 450 degrees Fahrenheit. While the toaster oven does not have a defrost setting, as the most versatile toaster ovens do, it has specific settings to reheat and warm your food. This toaster oven uses 1,500 watts, which is more power than most of the toaster ovens in our lineup use, but it's less than some of the best toaster ovens. The more wattage an appliance uses, the more energy it draws, which can mean a higher electricity bill.

This small toaster oven cooks food evenly. During our tests, it performed well by effectively cooking a variety of foods. Each of the foods came out toasted evenly. However, when we tested the length of time the oven took to preheat, it never reached the set temperature of 350 degrees Fahrenheit until we raised the temperature of the unit. When testing the temperature accuracy, we found that this toaster oven's internal temperature was slightly lower than the temperature to which we set the oven. In other words, it may add a small increase to cooking times.

Frigidaire's stainless steel toaster oven holds up to six slices of bread on its rack. In addition to the rack, the toaster oven comes with a bake pan and a pizza pan. You can choose from a variety of cooking methods with a conventional setting, infrared setting or convection fan. With infrared and convectional cooking, the heat-up time is reduced and the food cooks more evenly than it does with a conventional oven.

This convection toaster oven weighs a little over 15 pounds, so it isn't the lightest unit on our lineup, but it isn't too difficult to move from cabinet to counter. To control the cooking function, temperature and time, the toaster oven has clearly labeled dials. It also has buttons to start and stop the unit, as well as to turn on the convection fan. Between its sleek design and user-friendly interface, this is a quality toaster oven.

This six-slice countertop convection oven lacks an automatic rack ejector, which means you need to have oven mitts on hand to pull the racks out. It has several other features that make it both convenient and safe, though. With the automatic shut-off, you can set how long you want the food to cook and be assured that the oven will turn off after the timer ends.

The outside of the oven remains relatively cool when in use. When the oven was cooking at 350 degrees in our test, the exterior temperature of the unit remained at 104 degrees Fahrenheit, and the handle only reached 77 degrees, so it's not a big burn risk. The oven also has a nonstick interior, which helps with cleaning and maintenance of the unit. The 45-minute timer might limit the foods you can make, though, unless you adjust the timer while the food is cooking.

This toaster oven has 10 different cooking functions, which is more than any other toaster oven we reviewed. These functions are bagel, bake, broil, convection, cookies, pizza, reheat, roast, toast and warm. Depending on what food you are cooking, you can adjust the rack to either make more room or place it closer to a heating element. This toaster oven comes with a one-year warranty, which is standard.

The Frigidaire Professional 6-Slice Convection Toaster Oven is an effective and user-friendly cooking appliance. With the 10 cooking functions, you can use this oven to cook almost any food. While the oven may cook at a slightly lower temperature than it is set for, it cooks your food both quickly and evenly.