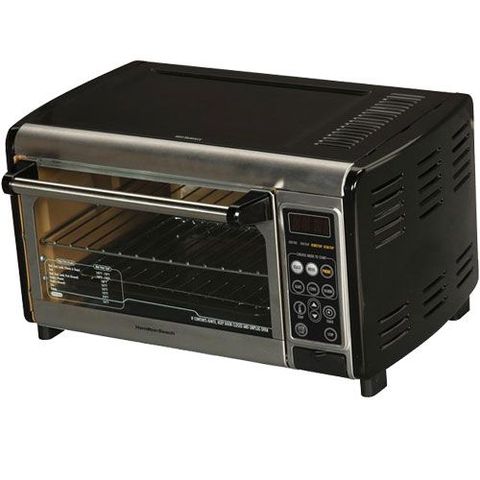 The toaster oven offers a wide variety of safety and convenience features. It also holds a large amount of food and cooks it using minimal energy.

Editor’s Note: This product has been removed from our side-by-side comparison because it is no longer available. You can still read our original review below, but Top Ten Reviews is no longer updating this product’s information.

The Hamilton Beach Set & Forget 31230 Toaster Oven offers a variety of features, including six cook functions and a built-in probe to test food temperature. While the toaster oven lacks some convenience features, like a rack that automatically ejects, its capabilities and intuitive design make it a quality choice for a toaster oven.

When preheating the oven, we found that it took the toaster oven a significant amount of time to reach the right temperature. When set at 350 degrees, we waited for 10 minutes for it to reach temperature. When it did not, we increased the oven to 400 degrees Fahrenheit and it eventually reached temperature.

This toaster oven always remained cooler than for what we set it, regardless of what we were cooking. While you may have to increase cook times slightly, we were still able to cook food both evenly and thoroughly. While the interior of the unit was cooler than the thermometer’s setting, the top and handle of the unit became warm. We measured the top of the unit to be 200 degrees Fahrenheit, making it dangerous to touch. However, the handle only heated up to 87 degrees, so we could still open the unit.

While this is a compact toaster oven, it still holds up to six slices of bread or a 12-inch pizza on its rack. It also weighs almost 17 pounds. You can choose between cooking foods using the convection fan or use the oven the traditional way. Rather than a confusing dial, the toaster oven has buttons for each of its settings, including one that turns the convection fan on and off. It also displays time and temperature on its screen, which helps ensure that you set the toaster oven correctly.

This small toaster oven offers several safety features. With automatic shut-off, the toaster oven turns itself off automatically after it is done with the cooking cycle. Unfortunately, the unit does not have an automatic rack ejector, so you have to pull out the rack manually, which increases the likelihood of getting burned.

This six-slice toaster oven offers six different cooking modes including toast, broil, probe, bake, convection and warm. You can access the cooking modes, as well as adjust the temperature and timer, using the digital touchpad. The timer has a maximum time limit of 120 minutes. Hamilton Beach provides a one-year warranty for this toaster oven.

The toaster has a light-colored, nonstick interior that makes cleanup easy. While the unit only has one rack, you can adjust the height of it to fit most foods. Hamilton Beach includes a rack, bake pan and broiling rack to use with the toaster oven.

The Hamilton Beach Set & Forget 31230 Toaster Oven effectively bakes, broils and toasts food. With a built-in probe, you can make sure your food is being cooked thoroughly. This black toaster oven allows you to cook using either heating elements or a convection fan so that you can use the option that will cook your food most effectively.