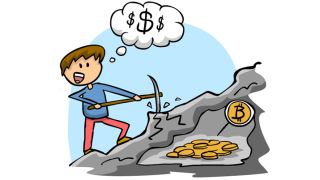 A digital commodity revolution is upon us. Bitcoin is quickly establishing itself as a viable digital currency, which offers the convenience and security of cold hard cash. Bitcoin is poised to rewrite the way the human race does business, or at least enhance it. The internet is alive with numerous stories of people using Bitcoin for banking, shopping and investing. Unfortunately, Bitcoin is fast becoming the preferred currency of illegal services, such as the infamous Silk Road black market website. It only makes sense that enterprising hackers want to find ways to enslave your computer to build their wealth and buy illegal stuff. Antimalware software is the best way to protect your PC from Bitcoin mining malware attacks.

To understand why Bitcoin is such a hot commodity, let's dive into the details and uncover the truth behind this fascinating monetary newcomer. First, while buying Bitcoin is the easiest way to way to get it, you're likely paying too much for it. Bitcoin is obtained in very much the same way as silver, gold or platinum in a process called Bitcoin mining. However, let's clarify something here: this type of mining is digital, and takes place all over the world via the processors on every kind of computer. With the appropriate software and hardware, you can get Bitcoins - just not very many. In theory, if you have enough computers at your disposal, you could amass a fortune very quickly. Can you see why hackers want to use your computer?

Do you want another reason why criminals love Bitcoin? Since Bitcoin is a decentralized currency that no one government or corporation controls, it is virtually impossible to track. This means you can pay with Bitcoin without having to give away any personal information, such as credit card or bank account numbers.

In 2011, the world saw the birth of new malware, a Trojan horse by the name of Infostealer.Coinbit. The purpose of this malware was to steal Bitcoins from unsuspecting digital wallets and deliver them to a hacker somewhere in Poland. Malware scanners today can protect against this malicious exploit, so you may want to find one to help protect your Bitcoins, if you have any.

Recently, the value of Bitcoins quadrupled to over $100 for the first time. This increase caught the attention of people around the globe, including hackers. Within days, new strains of Bitcoin mining malware started appearing online. Hackers began to spread their newest infections. The infections quickly forced an unknown amount of computers into Bitcoin mining botnets. The security industry took notice of these Bitcoin mining operations and began offering protection against most attacks, but it's likely that this isn't the last you'll hear on the subject.

The impact of Bitcoin is far-reaching, but it can do some good in the right hands. If you decide to get into the game and try your hand at Bitcoin mining, just make sure you have a plan to protect your hard work from the hands of those who choose to travel down the dark road. Protecting your Bitcoin wallet is yet another reason to find a strong malware remover.