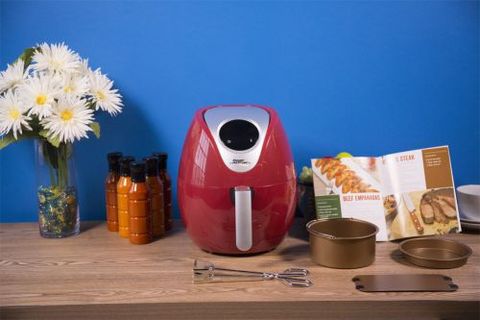 The PowerFryer XL was good at one of the most common tasks with these machines – making fries – and it’s a fine choice if you need to cook for large groups.

Our fries came out perfectly crisp with the PowerFryer XL. That cannot be said of all the air fryers we tested. The chicken was much less impressive, though, so this air fryer ended up with only a mediocre score for food preparation. In fact, its score was a little above average when all was tallied. The wings had a few lighter and darker spots in each batch. They weren't drastic, but results still seemed a bit unpredictable. It has one of the largest baskets for cooking up lots of food quickly if you are feeding larger groups.

The PowerFryer XL is not for those with limited space. It has the largest overall dimensions of any unit we tested. But at least it does more than air frying, so you feel like you are getting a little more potential kitchen help from something that takes a lot of room. This is one of the better ones for multitasking. It comes with a large baking pan, which can facilitate roasting, cooking casseroles and baking cakes. There is also a pizza pan for making pies, tarts and pizza. Tongs are included too for removing foods easily.

The PowerFryer was also easy to use. The touchscreen digital controls made it possible to get frying within the first few minutes. This one also was relatively easy to clean, although there were some food particles stuck to it a little longer than to the others. We washed them all by hand, but this one has a basket that can go in the dishwasher, which adds to its convenience.

One thing that stands out in a bad way with this machine is the short warranty. You only have 60 days to find out about any quirks and return the device. That is ridiculously short. Most of the air fryers offer at least one year. If you prefer a longer warranty, check out the Secura Hot Air Fryer.

This air fryer has a short warranty and takes up a lot of counter space, but it did a good job of preparing crisp and delicious food, especially french fries. We had a few darker spots on some tests, but it did a good job generally. It was also user-friendly, including when it was time to clean. The large capacity might make it a good fit for larger households.