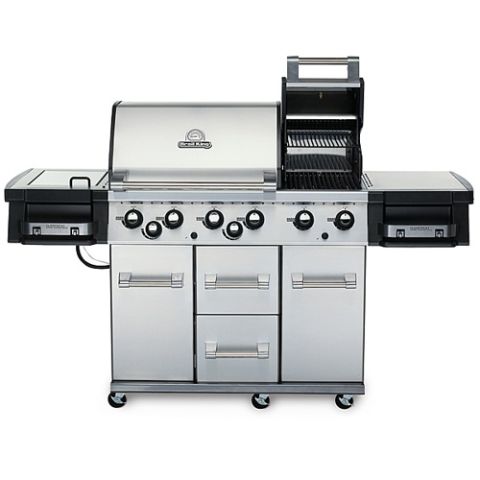 Broil King has created a fine backyard-grilling machine in the Imperial XL 957644 LP gas grill. This grill has power, grilling space, plenty of features and solid construction. The added natural gas connectivity and rotisserie burner are a nice bonus. Any serious griller should consider the Broil King Imperial XL as an outstanding option for a gas grill.

The Broil King Imperial XL has five primary burners, a side burner and a rear rotisserie burner. The primary burners can generate up to 60,000 BTUs, or British Thermal Units. BTUs are a helpful measurement to determine the potential power of a grill, and 60,000 BTUs spread across five burners is an excellent reading. The side burner can generate 10,000 BTUs on its own, and the rotisserie burner can pump out up to 15,000 BTUs. While the rotisserie has more than enough power, the side burner is lacking and could use a couple thousand more BTUs. The inclusion of this premium rotisserie kit is a boon to the Broil King Imperial XL, along with the quick-start electronic ignition system.

If you need a lot of cooking space, the Broil King Imperial XL is an excellent grilling option. This gas grill has a whopping 750 square inches of primary cooking area, as well as 250 square inches of warming rack space. You'll be able to fit a large amount of barbecue favorites on the primary cooking space while simultaneously cooking favorite dishes on the side and rotisserie burners. There is also a built-in Accu-Temp temperature gauge for the primary burners, helping you to monitor and maintain the main grill. Furthermore, this gas grill has a natural gas option. Natural gas is becoming much more common in gas grills, and the inclusion of this hookup on the Imperial XL is a nice touch.

The 750 square inches of primary cooking area is divided between two boxes, one 500 square inches and the other 250. The unique dual hood design allows for more versatility. You can cook two completely different entrées at different temperatures. If one entrée needs more time with the lid closed than the other food, you can cook it in the separate smaller compartment. You can, for instance, cook steaks and fish on one side and pizza on the other.

Several five-burner gas grills squeeze the primary burners into a tighter space to make the grill lighter and more portable, but this detracts from cooking space as a result. The Broil King Imperial XL forces you to decide whether portability or cooking space is more important to you, as this is a heavy, bulky gas grill. However, the grill is constructed extremely well, and it's built to last. The stainless steel housing prevents rust and wear as do the stainless steel cooking grates and burners. Every part of the Broil King Imperial XL looks solid and reliable.

Best gas grills 2020: Find the right grill for your next BBQ

Speaking of reliability, you can feel confident in the purchase of a Broil King grill, as the cast aluminum components are all covered by a lifetime warranty. The burners are covered for five years, and parts and paint are covered for two. These warranties aren't the best we saw from competing gas grill manufacturers, but Broil King stands proudly behind their grills. You can reach a representative by phone or email to handle any problems that you may have. Furthermore, the company website contains helpful FAQs sections and online manuals to address common concerns.

The Broil King Imperial XL is a fantastic luxury grill. It has five powerful primary burners along with side, that could use more power and a rotisserie burner, that has plenty of power. The primary cooking area provides as much space and versatility as you will ever need. It offers plenty of cooking space, meaning you spend less time cooking and more time enjoying the barbecue. The natural gas option is an excellent benefit as well. You won't go wrong purchasing a Broil King Imperial XL gas grill.