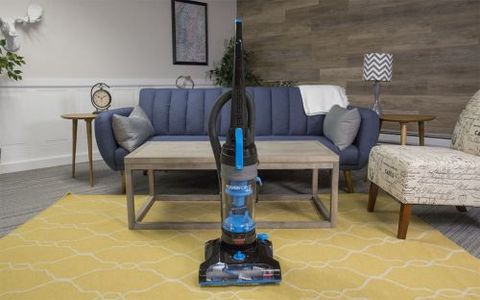 While it is a little bulky and hard to maneuver, this vacuum cleans most things relatively fast and comes at a budget-friendly price.

The Bissell PowerForce Helix was middle of the pack in most ways, but it does offer a longer warranty than most budget vacs, and it is below average for price. It was rather bulky compared to a lot of the ones we were comparing in this category and it lacks a swiveling head, but it was able to get our test floors clean.

Its strongest showing was on our pet hair removal test. We took dog hair and ground it into medium-pile carpeting, the type most common in homes, and then counted the passes each vacuum required to remove it. The number was quite low in the case of the Helix – almost the lowest – so that was impressive.

It was also quite good at removing flour, which we used to represent the fine dust that collects on flooring. It required very few passes to get rid of it completely. One problem task for this vacuum was denser debris, including cereal. It tended to fling it out of the way rather than cleaning it up on the first few passes. That was a pretty common problem on the lower-priced vacuum cleaners we were comparing, but it was still annoying. You have to go hunt down the larger debris, which adds time to the chore.

The Helix also had one very common problem for bagless models – it creates an epic dust cloud. It was easy to figure out how to empty it, but the cloud that it created in the process wouldn’t be fun for allergy sufferers. If you prefer a bagged model, consider the Hoover Tempo WidePath.

This Bissell is a relatively big and bulky model. It is only slightly above average for weight, but its larger proportions and lack of a swiveling head made it less maneuverable than other comparable models. It would also take up more closet space than many other models. At least the cord is longer than average. That means less plugging and unplugging, even if you are cleaning a big space.

The warranty also is above average, which was a nice surprise. Most units offered just one year of coverage, but you get double that with the Helix.

The Bissell PowerForce Helix struggled a little to clean dense debris like kitty litter and cereal from our test floors, but it was good at removing flour, so if dust is your primary concern this is worth a look. It is a little bulkier than most and lacks a swiveling head, but it boasts a long warranty and relatively low price.