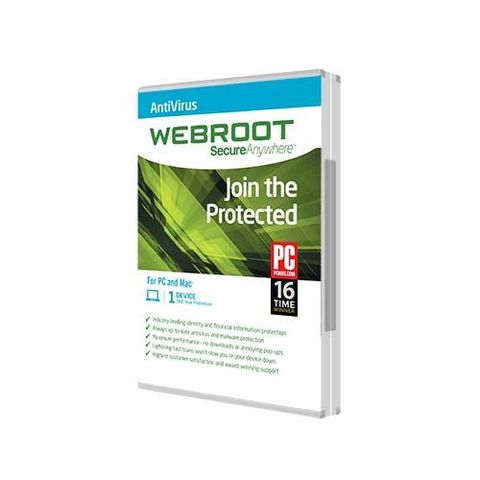 The Webroot SecureAnywhere Antivirus code will not take up much room on your PC because it leverages cloud technologies.

Editor's Note: This review has been removed from our side-by-side comparison because AV-Test, an independent antivirus test lab, did not evaluate Webroot Secure Anywhere Antivirus in its latest round of tests. These tests play a heavy role in our ratings, so we are unable to review products not included in the tests. The original review is below, but check out our current Antivirus Software comparison here.

Webroot SecureAnywhere Antivirus is more than antivirus software. It is antimalware. It stops the viruses and worms that exist in order to infect other computers, but it also protects you during web surfing sessions by blocking harmful websites. And it takes down spyware that tries to deceive you or exploit vulnerabilities in operating systems. Spyware steals information about you and sends it to someone else. Some spyware is fairly benign. Adware, for example, watches you in order to tailor advertisements based on your habits. Adware can also happen with your consent if you opt to use a free service that involves accepting ads. Another less-lethal form of spyware is the tracking cookie. Advertising companies install cookies on your computer in response to you clicking on ads. Unless you delete it, the advertiser will know when you visit a site with its ads.

If spyware was just adware and tracking cookies, it would be bad enough. But there are worse forms. Some spyware changes computer settings, slows internet connections and slows your home page. A jealous spouse or suspicious lover can use spyware to monitor you. Webroot SecureAnywhere Antivirus insulates you from such attempts to infect your PC. Furthermore, Webroot is an honest product, not to be confused with dozens of fake antispyware products designed to trick you. This antivirus software reflects sound design approaches to the user interface and takes advantage of Windows features to promote ease of use.

Antivirus software such as Webroot SecureAnywhere Antivirus frustrates malware in a couple of ways. It scans data and blocks viruses that it detects. And it removes malware that is already lodged in a computer. You can tell it to scan your PC according to a schedule that you select. It looks at the Windows registry, operating system files and applications to give you a list of threats. Because having the latest threat signatures does not protect against a brand new, zero-day threat, Webroot uses other ways to detect threats based on their behaviors or by comparison with known threat families. The actual signature database in Webroot is not gigantic because it relies more on analyzing behaviors of suspected malware based on data that Webroot keeps in the cloud. The architecture of Webroot is code with a small footprint that uses information in the cloud. It is compact and efficient. After a full system scan, Webroot scans a PC in a couple of minutes. This software is lean and mean. Unfortunately, because of the way it works, it doesn't lend itself to testing by third-party test labs, so it is difficult to compare its performance to the competition.

This antivirus software is well documented. Webroot supports you via live email and telephone.

If you want a way to protect yourself from malware, Webroot can do it. It blocks and removes viruses and rootkits so you can preserve your settings. It protects you from websites that could do you harm. It busts keyloggers that try to monitor your keyboard activity.